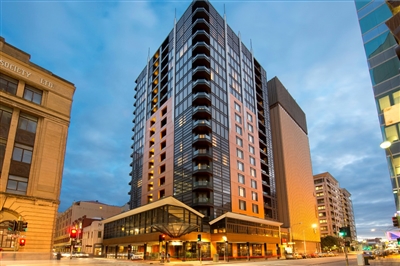 Peppers Waymouth Hotel celebrated its grand opening this week. Formerly the Rendezvous Hotel, the property rebranded under Peppers last month and with it brought the brand's rich history of celebrating fine food and wine.

The hotel offers 202 five-star hotel rooms and suites, two food and beverage outlets - The Cafe and Lounge 55; a heated indoor lap pool, spa, sauna, and fitness centre. For meetings, events and private functions the 120 square metre conference room caters for up to 150 guests (cocktail) and can be divided into two smaller rooms.

As the premium brand in the Mantra Group portfolio, Peppers ensures a high standard is maintained for its guests and will undertake ongoing upgrades to rooms and public areas over the next 12 months.

Peppers Waymouth Hotel joins two Mantra and two BreakFree hotels in Adelaide to bring the total number of Mantra Group hotels to five in Adelaide CBD. It is also the second CBD and capital city hotel for the brand following the addition last year of Peppers Gallery Hotel Canberra. Along with Canberra and Adelaide, Melbourne will soon have the third CBD Peppers hotel opening early 2016 in the Docklands precinct and another new build Peppers hotel is slated for Perth opening late 2016.

The CBD expansion further strengthens the evolution of the Peppers brand which started as a small group of boutique retreats 30 years ago in the NSW Hunter Valley, expanding to include larger coastal resorts over the last 10 years before its first foray into metropolitan style accommodation with the opening of Peppers Broadbeach in 2010.