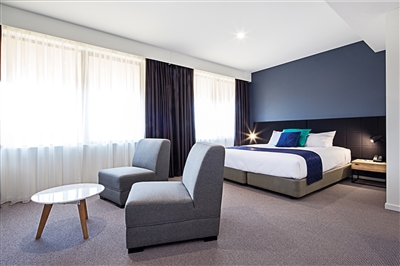 Formerly an office tower, which has been transformed into a 176-room hotel as part of the city's vibrant urban renewal program, Mantra MacArthur Hotel is the only new hotel to open in Canberra in 2017.

The hotel is operated by Mantra Group, the leading Australian-based hotel and resort operator with 129 properties across Australia, New Zealand, Indonesia and Hawaii, and is owned by Canberra developer HTI Group.

Mantra MacArthur Hotel is located at 219 Northbourne Avenue in Canberra's inner city suburb of Turner. The hotel is located close to the central business district, the Australian National University and has a light rail stop, which seamlessly connects the hotel with the city, directly outside the hotel.