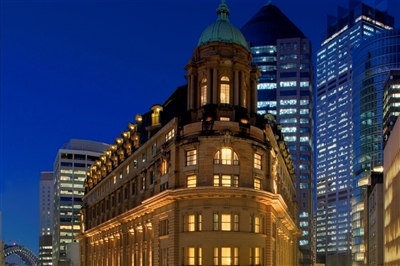 Radisson Blu Plaza Sydney is celebrating the completion of its $13.5 million re-design, with all its guest rooms and function spaces now reinvigorated and fully operational.

Reminiscent of New York's famous Flatiron building and occupying a landmark position in the heart of Sydney on the corner of Pitt, Hunter and O'Connell streets, the Radisson Blu Plaza Sydney is a stylish five-star hotel housed within a stunning heritage-listed property.

The original building on this site dates back to 1856 when it was home to John Fairfax & Sons, publishers of Australia's oldest surviving newspaper, The Sydney Morning Herald. It was acquired in 1955 by the Bank of New South Wales, later rebranded as Westpac, and then in 2000 was opened as the Radisson Blu hotel.

The first phase of the 'new Blu' re-design which was completed last September, 2015 focused on the function and meeting rooms. These have all been refreshed and modernised and provide more than 500m2 of space, ideal for corporate business meetings, board meetings, social events, private dinners or cocktail functions from two to 200 guests.

The second phase of the re-design, completed in July 2016, includes a refresh of all 336 guestrooms and 28 suites at Radisson Blu, with new silk fabrics and contemporary chrome and metal-blue colour schemes, stylish chevron patterning reflected in the lighting and upgrades to the fittings in the building's original marble bathrooms.

The new look and feel of the hotel's meeting spaces and guest rooms will complement the critically-acclaimed and two-hatted Bentley Restaurant and Bar, which found its contemporary new home in the historic façade of the hotel in 2013.


4/08/16.
Keep in touch with Us
Stay where you are we’ll push the news to you
SUBSCRIBE NOW