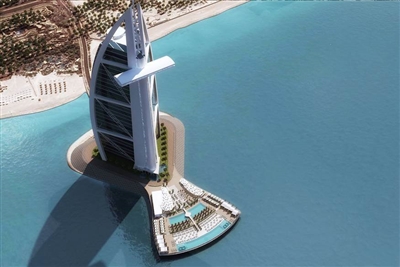 Standing on an artificial island and with its curved facade built to resemble the sail of a dhow ship, Dubai's Burj Al Arab hotel became an emblem for Dubai when it opened in late 1999.

This year the landmark is to be redefined, with the addition of a new "North Deck", a 10,000sq metre outdoor space that spreads fan-like to a distance of 100 metres over the Persian Gulf.

The new North Deck will feature a 612sqm fresh water pool and a 828sqm salt water pool, with 32 cabanas and 400 sun loungers, and a restaurant and bar.


3/02/16.
Keep in touch with Us
Stay where you are we’ll push the news to you
SUBSCRIBE NOW