Hotel Kurrajong in Canberra has now been officially opened

Hotel Kurrajong in Canberra has now been officially opened 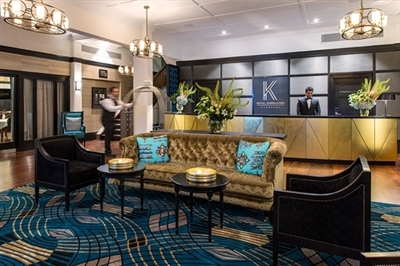 The TFE and NRMA owned Hotel Kurrajong in Canberra has been officially opened.

The hotel comprises of 147 rooms, 26 of which are located in the heritage wing, alongside four executive suites, four balcony rooms and eight terrace rooms.

Other key heritage elements include a cosy fireplace, library full of historic literature and the collages of photographs from different periods along the hotel's hallways.

Hotel Kurrajong is also home to Chifley's Bar and Grill, helmed by award-winning hatted chef Michael Chatto, who has created a menu loaded up with local produce, hand selected meats and more than 120 local and international wines.

Chifley's also features a stand-alone steak menu, where customers can choose from 18 different cuts including David Blackmore Wagyu and Cape Grim Black Angus, each listed with its weight, origin and marble scores.

Hotel Kurrajong is also one of Canberra's architectural landmarks. The building was constructed from 1925 to 1927 and was built to accommodate public servants in preparation for the relocation of parliament from Melbourne. It is well known in the capital for being Prime Minister Ben Chifley's home from 1945-49, who stayed in the hotel instead of The Lodge in an effort to cut costs.