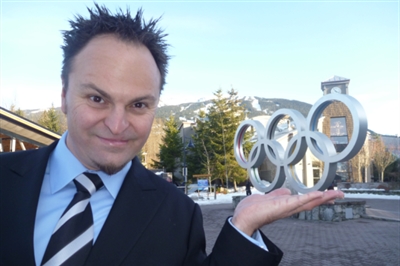 Olympic Champion, Champion Speaker and genuine onstage Motivator and Entertainer is a unique skillset, and wow talk about blowing your own trumpet!

Transitioning from being an expert speed skater to an expert motivational speaker has been an interesting ride for Steven over the last 10 years. He has now presented at over 750 conferences and events in 15 countries and still loves it.  He loves the adrenalin before going onstage and loves that his strategies for success in business and in life are able to inspire and help so many people.  Passion, Persistence and Teamwork are what have gotten Steven to where he is today and he would love the opportunity to instil these traits in your team at your next event.

He is also an experienced 'Master' Of Ceremonies, Conference Facilitator and even does stand-up Comedy.  He doesn't call himself a comedian but seriously is there anyone on the planet better known for standing up….

Steven Bradbury created history when he won Australia and the Southern Hemisphere's first Winter Olympic Gold Medal.  Bradbury won fans the world over for the honesty and humility he showed after the win. He saw the victory as reward not for one race, but for 12 years of hard training that included more than his share of misfortune.  A race accident in 1994 led him to being impaled on a rivals skate, creating a cut in his leg, so extensive he lost 4 litres of blood and required 111 stitches. He was extremely lucky to survive. A training mishap in the year 2000 broke his neck. After 6 weeks in a halo brace Bradbury again fought his way back, and 18 months later that same neck was supporting an Olympic Gold Medal!

Honours
In 2007 Steven was awarded an Order of Australia Medal (OAM) for services to Australian Sport.

Testimonials
"Steven was amazing - the best motivational keynote speaker I have ever seen (and I have seen a few!) I read his book on the weekend and couldn't put it down. What an amazing story - I am so glad he told it." National Marketing Manager, AMP Capital Shopping Centres

Videos
As well as being entertained and inspired you will leave with the knowledge the much of the prize is in the journey and success takes Passion, Persistence and Teamwork. For now watch some short videos on Steven and his presentations.